Vote Jones, Sellers for STRS Board 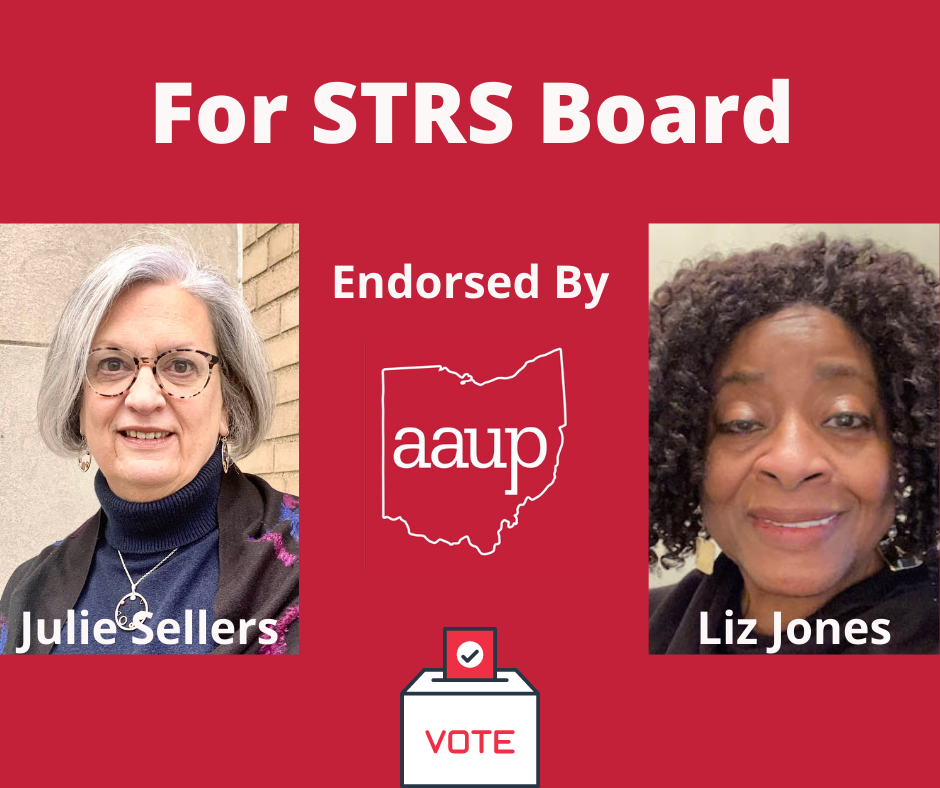 In early April, faculty who belong to the State Teachers Retirement System (STRS) will receive a ballot in the mail to vote for STRS Board members. Eligible voters will be able to cast their votes by mail, phone, or online. Given the continued mail delays, we recommend casting your ballot by phone or online.

The OCAAUP Board has endorsed Elizabeth Jones for the retired member seat and Julie Sellers for a contributing member seat. Only retirees will be able to vote for Ms. Jones, while only active educators can vote for Ms. Sellers.

Jones and Sellers are both members of the Ohio Federation of Teachers (OFT) and both hail from the Cincinnati area. Last year, Elizabeth Jones ran on a platform with our own Professor Rudy Fichtenbaum, but unfortunately, did not earn enough votes to join Dr. Fichtenbaum on the STRS Board. This is Julie Sellers’ first time running.

The OCAAUP Board made the decision to endorse these candidates for several reasons:
-They sought our endorsement.
-They share Dr. Fichtenbaum’s vision of changing the culture at STRS — a culture that has left retirees without the benefits they were promised and active members contributing more to the system than will be the value of their pension upon retirement.
-They come highly recommended from AAUP members and trusted OFT colleagues.

Below you can read about their candidacies in their own words.

I’m a retired High School English teacher and guidance counselor with more than 30 years experience at Cincinnati Public Schools. Throughout my career I’ve been involved in the fight for fair pay and retirement security for educators – first as my union’s Collective Bargaining Chair during my teaching years, and now as the President of the Cincinnati Federation of Teachers Retired, Local 1520-R.

I amped up my activism on retirement issues when our COLA was discontinued after 2013 and ran for President of my retiree local shortly after that. As President, I have attended STRS meetings regularly and have mobilized my membership to fight for the reinstatement of the COLA. I’ve also sought out independent information from the National Conference on Public Employee Retirement Systems (NCPERS) and the National Institute on Retirement Security (NIRS) that has helped inform my views on improvements that must be made at STRS.

I am running because STRS needs a change in direction and that will only happen with new voices and ideas on the STRS Board.

As a board member, my top priority would be to reinstate the COLA without creating any additional burdens on contributing members. Contributing members have already seen their benefits decrease due to a longer years of service requirement and age requirement. Retired members and contributing members must all move ahead together without letting ourselves be divided. To do this, STRS will need to move to a lower risk investment strategy that can sustainably increase our rate of return, and move away from hedge fund and private equity investments with their costly fees.

I’m an STRS contributing member, with 20 years of experience as an elementary school teacher before being elected President of the Cincinnati Federation of Teachers, Local 1520 in 2009.

In addition to my role as CFT President, I also currently serve on the Executive Board of the Cincinnati AFL-CIO Labor Council and the Executive Committee for Ohio Federation of Teachers, and as co-chair of the Ohio 8 Coalition, which is made up of district superintendents and union presidents from Ohio’s eight largest school districts.

I have always fought at the local level to make sure educators can retire with dignity. I’m running for the STRS Board because I want to fight for all educators to have that dignity. I’m not afraid to be a watchdog or to call people and institutions out when needed. I’ll push the Board to be more transparent and to stop doing the same old things that have kept STRS from recovering financially.

I’ve been involved with retirement issues since 2008, when actions were taken to make the system more soluble in response to the Great Recession. Unfortunately, the actions that have been taken in the last 14 years have not stabilized STRS, and contributing members are carrying the heaviest burden from that failure.

We pay the second highest contribution rate in the country (for statewide teachers pension systems), yet we’ve seen it become harder and harder to retire with full benefits. I’ll fight to reduce the years of service requirement and reduce or eliminate the age requirement. We can do that with smarter investments, increased transparency, and a long overdue increased contribution from employers.

I speak to CFT members everyday and that has given me a great understanding of the wide array of stressors that contributing members are facing as we do our jobs through a global pandemic. Having a secure retirement should not be one of those stressors, it should be a guarantee.

Higher Ed Would Get Boosts Under DeWine Budget